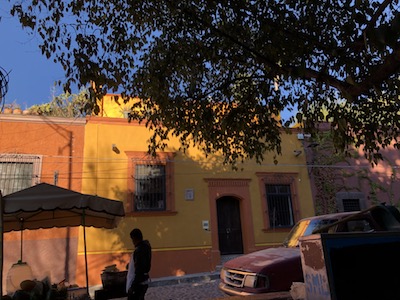 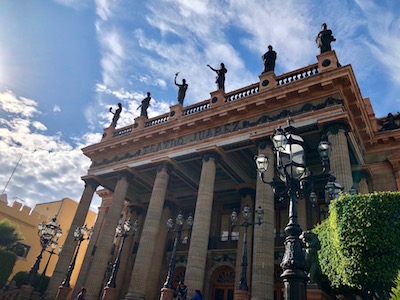 I am on a flight from Tampa to Guadalajara, Mexico. This is something of a miracle since I learned, when I came to check in, that in my rush to leave St Pete I’d brought an expired passport. The Lyft driver who showed up to drive me home to get the correct passport spoke no English, so communicating the urgency of the situation was difficult. But once I’d succeed in explaining my situation he flew like the wind across the bridge to St Pete. I retrieved my passport and returned to the airport with time to spare. Whenever I do something dumb like this I’m consoled by the fact that one of my brothers flew half way across the world to India only to be turned away at the airport because he didn’t have an Indian visa.

My excuse for being such an airhead is that, a few days before I was due to leave St Pete, someone rented my house for the duration of my trip. A financial boon but logistically difficult. Thank heavens for my efficient assistants!

2018 was an easier year for me, on the whole, than 2017. My grief over the loss of my son Jaro, diminished somewhat. Except for the month of September—the anniversary of his passing. Last year in September St Petersburg was struck by Hurricane Irma. Protecting my property and surviving the hurricane became my focus. This year I had no such distraction.

Those of you who follow me on social media know that I received a couple of grants this past year and had a couple of residencies at artists’ retreats. The first grant, from the St Petersburg Arts Alliance, was to conduct free autobiographical altered book workshops. The locations included Creative Clay Cultural Arts Center, the Dr. Carter G. Woodson African American Museum and the St Petersburg Museum of History. We then held an exhibition of the altered books at the Morean Arts Center. The second grant was from the Florida Division of Cultural Affairs to expand the project to the Greater Tampa Bay Area in the 2019, 2020 fiscal year. Both grant applications included a second component: creating a series of artist’s books with Jaro’s poems and my images.

This series of books will be my focus after I return to St Peterburg at the end of December when I’ll be making prints of my images and incorporating some of Jaro’s elegant graffiti. I’ve started the long task of transcribing the large stack of Jaro’s poems, mostly about his spiritual path. As a small child Jaro was fascinated by the moon, a symbol of the feminine aspect of the spiritual realm. For a long time he was deeply involved in yoga, even living in an ashram for almost a year. In his late twenties, after he was diagnosed with schizophrenia, spirituality in the form of Tibetan Buddhism became Jaro’s focus (as much as it is possible for a person coping with schizophrenia to be focused).

The project of incorporating Jaro’s poems and graffiti in a series of books with my images, has been evolving slowly. I started work on it during a residency two years ago at the Sanskriti Kendra in New Delhi, India. (A trip I was able to make thanks to a generous grant from Creative Pinellas.)  During a residency at Casa Buena Art Retreat in Nayarit, Mexico, I worked on a series of watercolors that I’ve since incorporated into the book project. Earlier this year, I continued the project during a residency at the Virginia Center for the Creative Arts in the foothills of the Blue Ridge Mountains. In July the project evolved further during a residency at Moulin a Nef in Auvillar, France. This project has become an important component of my healing—it is both art and art therapy. I plan to complete it in 2019.

As I type this, I’m on the bus between Guadalajara and San Miguel de Allende. We spent our first two nights in Guadalajara. The high point of our stay for me was an Airbnb Experience walking tour conducted by two charming young men. I didn’t mind at all being the focus of their undivided attention for four hours as we explored the sights of old Guadalajara! Seeing the mural by Orozco of Miguel Hidalgo, the priest who initiated the insurrection against Spain, was the most memorable experience of the tour.

My traveling companion and I fell in love with San Miguel de Allende. It was all we had anticipated, and much more. What a perfect place to spend the latter part of my birthday! Our Airbnb lodging (we had the entire house to ourselves) was located within easy walking distance of the plaza in the town center, the Jardin, and the Benito Juarez Park. Each day was a new adventure as we explored the library that houses the largest collection of English language books in Mexico and where we attended a concert of Spanish guitar and harp music. We spent the better part of a day exploring the Belles Artes, the oldest art school in the area, where we saw some impressive art, including a huge unfinished mural by Siqueiros. We also ate some gourmet meals—one in particular was memorable—at diner prices. Of course, we wandered the picturesque streets of San Miguel and explored its many beautiful churches. Our last evening was spent watching a Spanish language Christmas pantomime. In spite of the language barrier we got the gist of the story, especially when a sign appeared “US Border Parol” and the audience roared with laughter.

It was a special treat to be in San Miguel de Allende during the festive season. The pantomime was but one of the many ways in which the citizens of this magical town celebrate. Even the Christmas decorations are in good taste—unlike the gaudy, over-the-top decorations we’re used to in the USA.

Earlier today we traveled by bus to Guanajuato, a charming town nestled in steep, brown hills. This evening we explored downtown Guanajuato and soon learned why so many sing its praises.

This afternoon we took a guided tour on a bus through Guanajuato and learned that there’s an entire subterranean network of tunnels under the town. They look like ancient Roman viaducts built entirely of stone. We traveled through them to reach the hills that surround the town on all sides. Our guide was very eloquent about the sites but most of his descriptions were lost on us since the entire tour was in Spanish. But we loved the sights of Guanajuato. Tomorrow we’ll celebrate Christmas here by taking a trip to the top of one of the hills on a funicular. The following day we head to our last stop, Tlaquepaque, before returning to the States for the New Year. 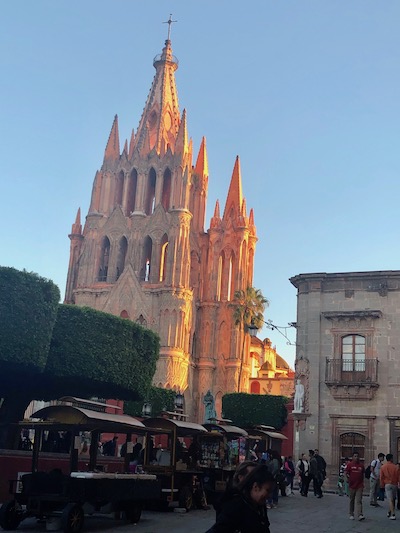 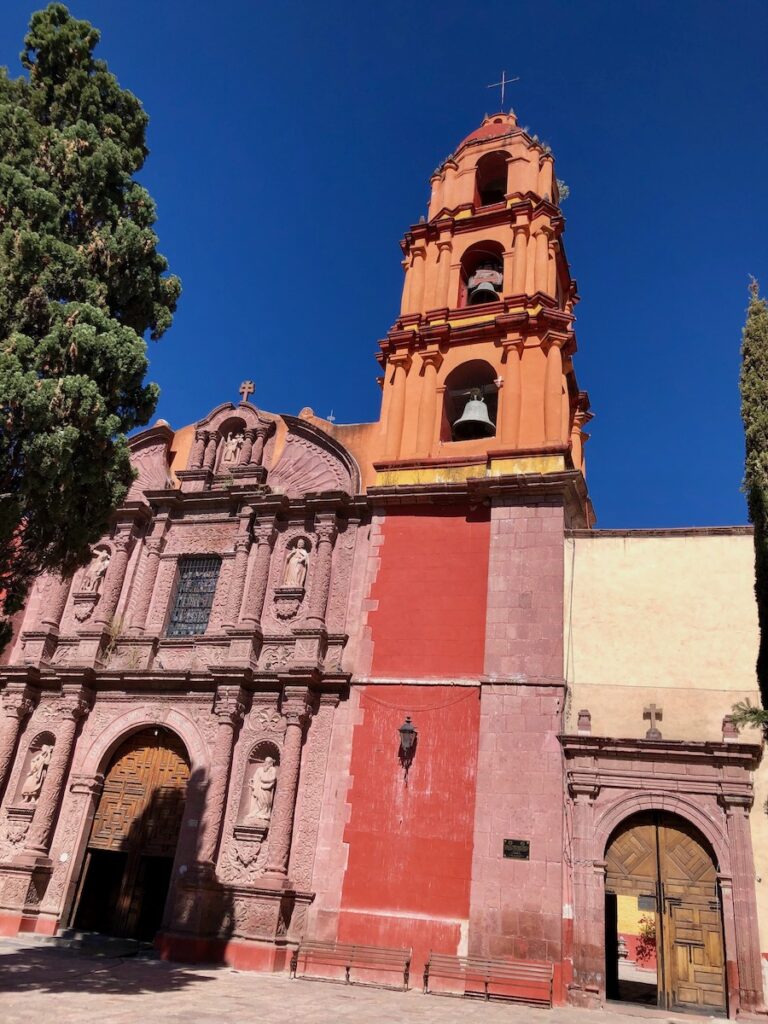 One of the many churches in San Miguel de Allende

Tlaquepue was fun for a day. It’s very touristy but so vibrant and lively with plenty to do and see. Since my traveling companion returned to the States yesterday, I explored the many shops and bazaars alone. I also visited the Historical House (one of the many lovely examples of Colonial Spanish architecture in the area) that had been beautifully preserved and converted into a high-end gallery with some excellent art by artists with international reputations, as well as a gourmet restaurant.

Now, on the flight returning to the United States, I am aware that’s it’s been a huge relief to have escaped the daily barrage of depressing news in the US. But soon there’ll be no escaping it…

As I contemplate the past year, on the whole, it’s been a productive year. Besides being awarded the grants and residencies I mentioned earlier, I continued to teach painting twice a week at the Morean Arts Center and to make art with the patients at St Anthony’s Hospital. I still find both activities satisfying. My art was included in a few exhibitions: the 50th anniversary exhibition at Hillsborough Community College in Tampa where I have a piece in the permanent collection and at the Museum of Fine Arts, St Petersburg, where I participated in the Exquisite Corpse Game, creating a sculpture with two other artists. This exhibition traveled to a gallery in Sarasota. As one of the artists who had received grants in the past couple of years, my work was also included in Creative Pinellas’ first Arts Annual in the old Gulf Coast Museum in Largo (now the Gallery at Creative Pinellas). 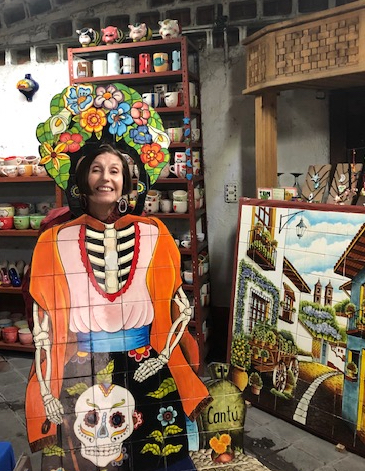 Me, channeling Frida in Tlaquepaque

In March 2019, I’ll be traveling to Mexico again to spend a month at an artists’ retreat ten miles outside of San Miguel de Allende. There I’ll be focused on completing our collaboration (mine and Jaro’s). 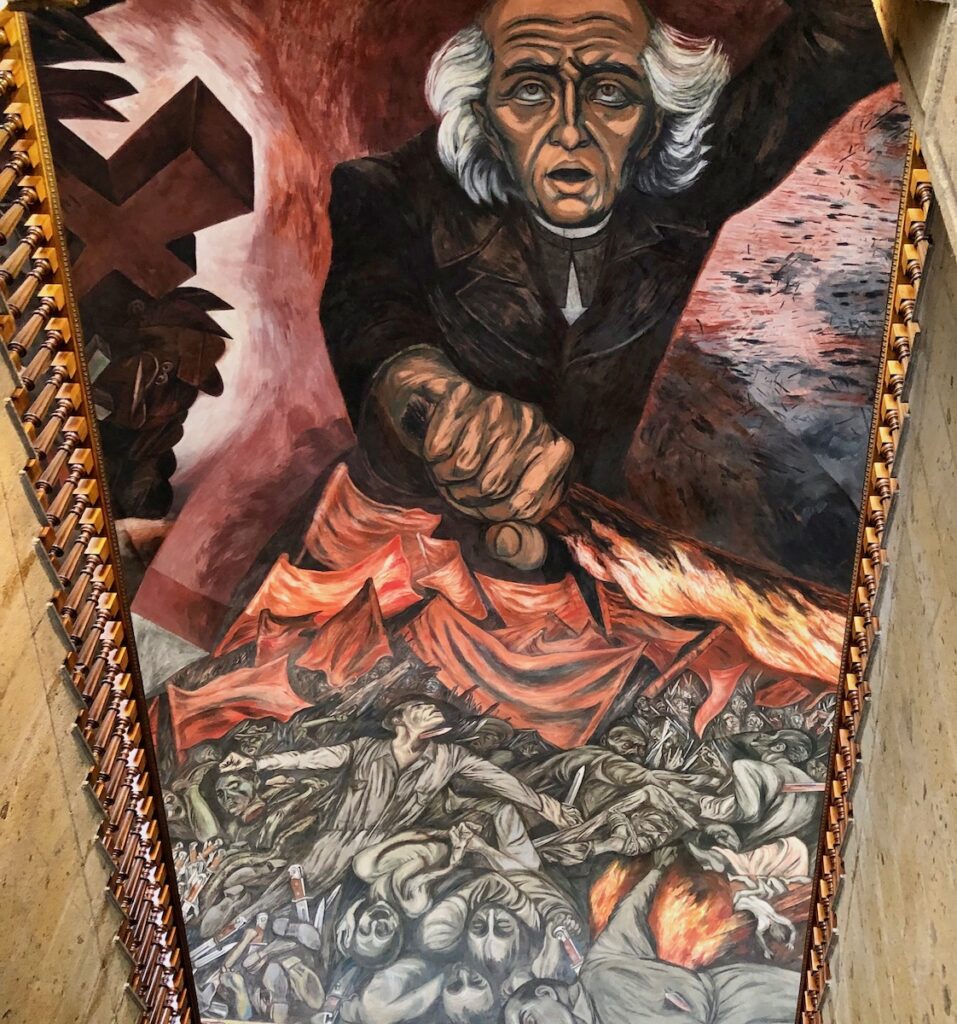 Miguel Hidalgo, one of the leaders of the insurrection as portrayed in a mural by Orozco in Guadalajara 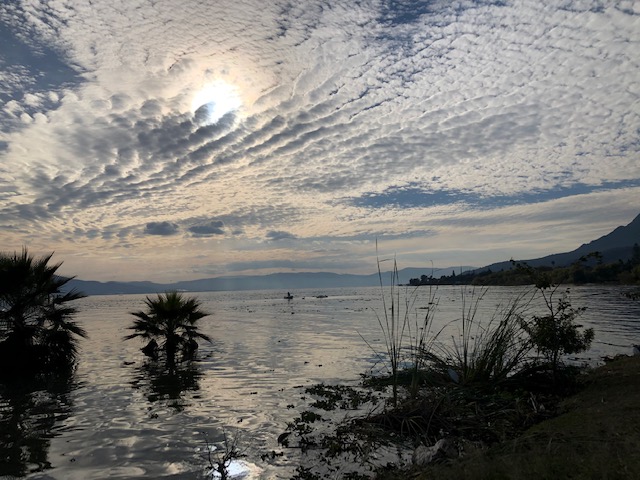