In 1980, shortly after moving to New Mexico, I started work on an installation entitled Suttee, Moths and the Bomb: a Trinity. I lived near Los Alamos where the nuclear bomb was developed and not far from Trinity sites where it was first detonated.

In this installation I drew parallels among moths, insects that, according to one theory, fly into flames because of an evolutionary failure to adapt, and widows of India who were burned alive in the Hindu rite of suttee. Also the human race that, with nuclear armaments, threatens a catastrophic conflagration of its own creation as well as environmental catastrophe. 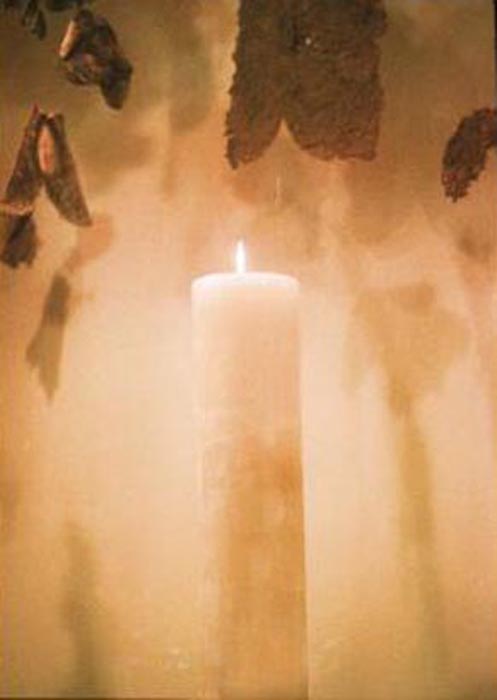 “Suttee, Moths and the Bomb: a Trinity,” installation detail

Suttee, Moths and the Bomb: a Trinity was first exhibited in Santa Fe, New Mexico, 1986, at the Center for Contemporary Arts where, in conjunction with the exhibition, I organized a panel discussion, “The Future and the Bomb,” with several panelists and a moderator. The installation was subsequently exhibited at the Woman’s Building in Los Angeles, and in galleries in Montana, Georgia and Florida during the 1980s, ‘90s and in the early 2000s. The installation consisted of a five foot candle in the center of the space, the floor of which was covered in sand so that viewer’s footprints became a part of the piece. Surrounding the candle approximately twenty moth-like objects were suspended from the ceiling on monofilament. They were made from bones, gathered in the New Mexican desert, and handmade paper (in which grasses, human hair, and seeds were embedded), fortified with wax and/or Rhoplex. A small fan kept these “moths” rotating slowly. Two sound tracks played in opposite corners: in one I could be heard reading an excerpt from the Padma Puranas, a Hindu text listing the many qualities of an ideal wife, and ending with the statement “…she must, on the death of her husband, be burned alive” on his funeral pyre; in the other I recited a poem I wrote about moths “…that whirl their dervish dance to a fiery oblivion.” 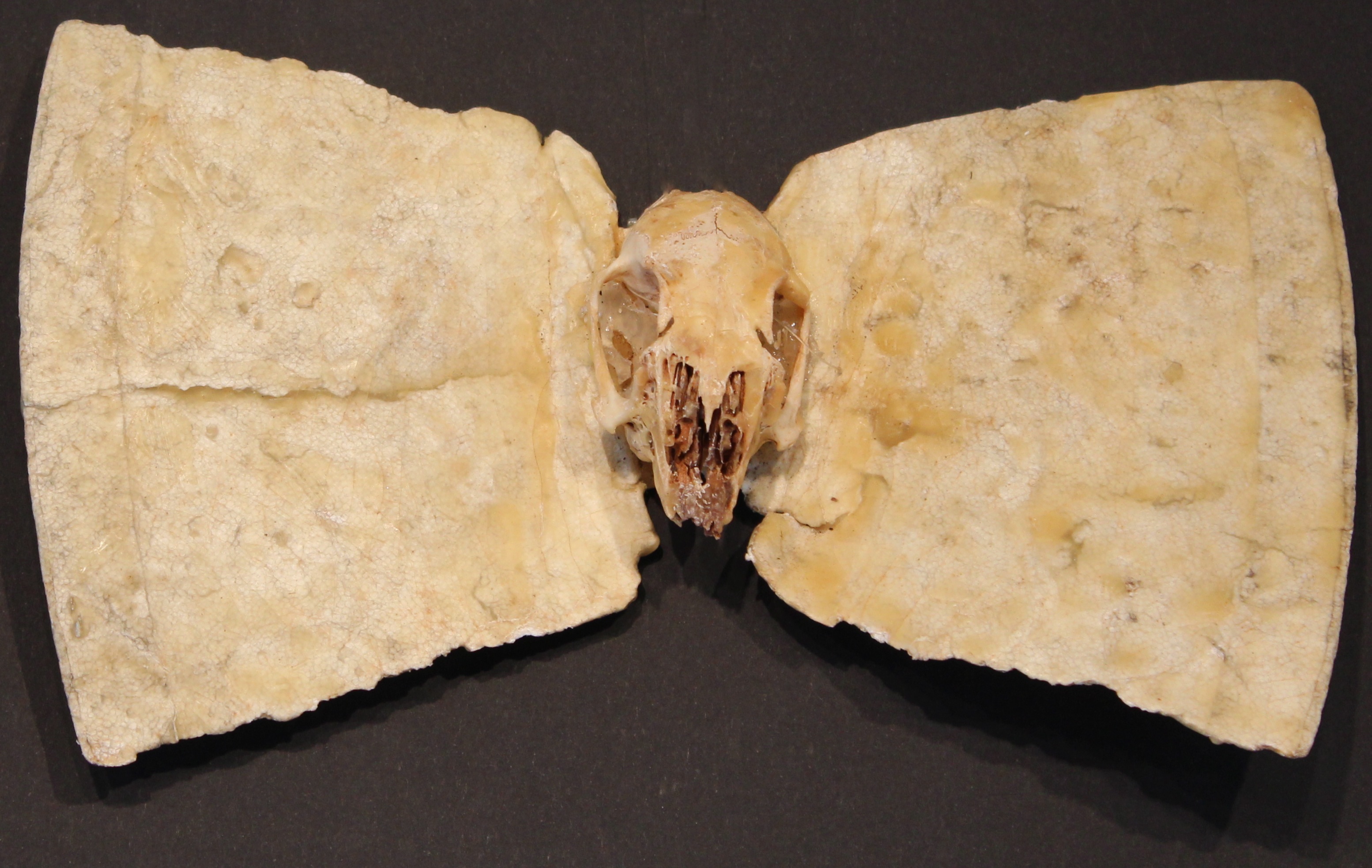 “Suttee, Moths and the Bomb: a Trinity” (detail: styrofoam cup and animal skull) 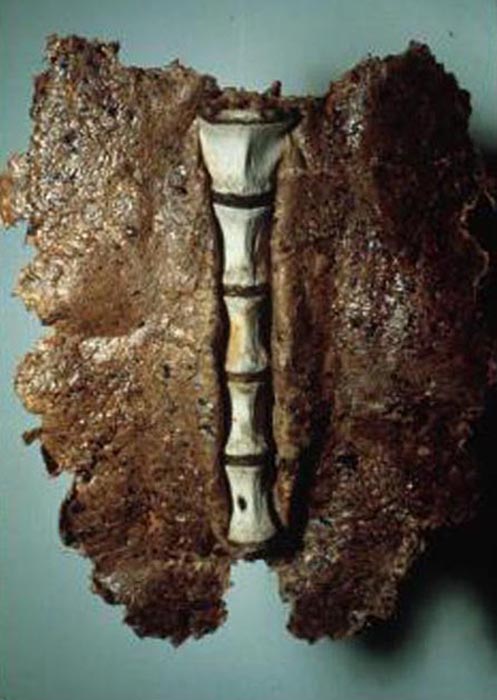 “Suttee, Moths and the Bomb: a Trinity” (detail: handmade paper, seeds and bone)

Also in the 1980s I worked with Pojoaque, New Mexico, middle and high school students on an installation they titled I’ll WIPP You and Waste You Away. We started by discussing the government’s plan to transport nuclear waste past Pojoaque to the Waste Isolation Pilot Project (WIPP) in Carlsbad, New Mexico. The completed installation, a larger than life-size creature made from bones pushing a rusty wheel- barrow through desert sand, was first exhibited in a juried exhibition, Art Windows on Route 66. In competition with professional artists my students won honorable mention. The installation was subsequently included in Artists Against WIPP at the Center for Contemporary Arts In Santa Fe. 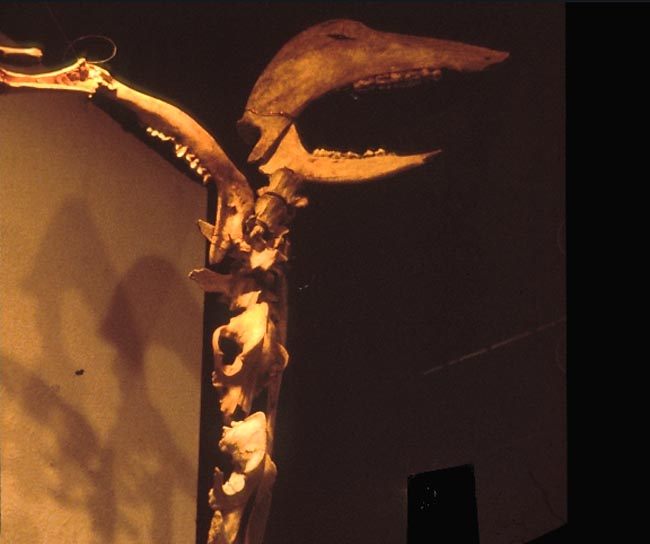 “I’ll WIPP You and Waste You Away,” installation detail

Throughout the ‘90s I worked on Bound Crosses and Boundary Crossings, a body of art incorporating found objects that evolved into my Ph.D. thesis exhibition and contextual essay that explores, in part, the ramifications of being a white woman born and raised in South Africa during the apartheid era. The following is an excerpt from my artist’s statement: “The source of my inspiration is…the changes that take place over time as an object weathers, exposed to the elements. Found objects acquire new identities and metaphorical meaning… The work becomes akin to a relic that bears the imprint of time. Each piece is a documentation of my surrender to its daemon, or spirit. As I add layer upon layer, building a textural surface, I am simultaneously unearthing an abstraction of my autobiography: the work is an external metaphor for an internal process; it attests to my own emotional, spiritual and intellectual journey.” 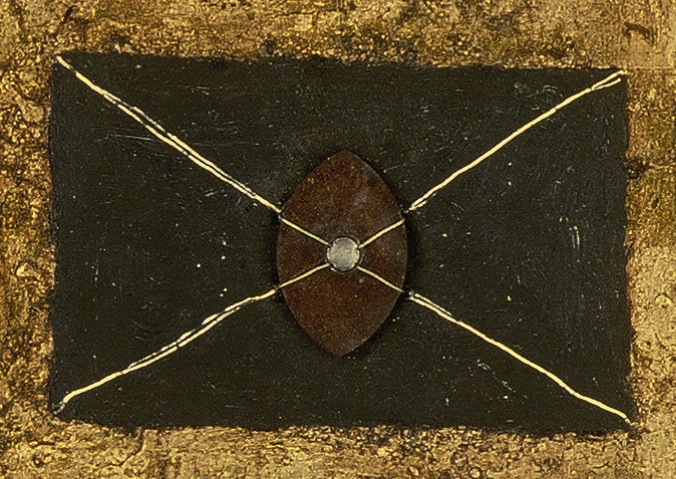 A more recent installation was first exhibited in Saint Petersburg’s Project Creo in 2003.  Entitled Modern Interior because, at first glance, the installation appears to be a large metal vase or pot on a patterned floor from which an arrangement of objects emerges looking like an arrangement of dried grasses. On closer inspection the viewer sees a female plaster-of-Paris nude, partially dismembered, among the objects in the “vase.” Representing Mother Nature, she is shoved, head first, among rusted metal pipes, tubes and wires: elements of our society’s industrial detritus. Arranged on the floor surrounding the “vase” are abstract charcoal and mixed media drawings on paper incorporating soil from states from New York to Florida–I use American soil because the United States is still the world’s greatest per-capita consumer of natural resources. Scattered on the “tiled” floor are small rusted metal objects representing more industrial waste. This scenario represents modern society’s interior, or psychological, state in its disregard for the natural world. 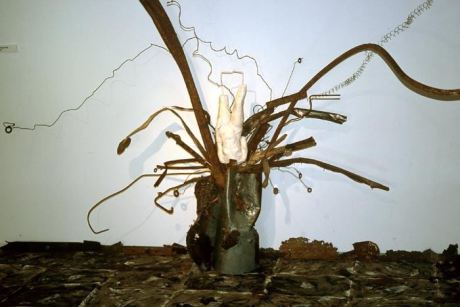 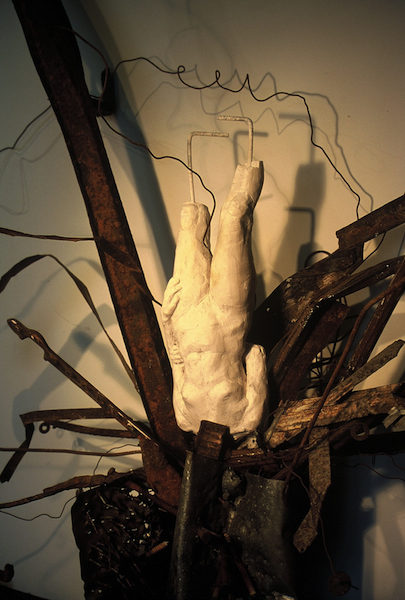 An installation created in 2004, also shown at Project Creo in St Petersburg, was entitled Sackcloth and Ashes. In the center of the space, suspended on monofilament, was a mixed media abstract bird above a conical pile of ashes. The walls were covered in burlap and attached to the burlap were large expressionist drawings on paper made from soot and acrylic medium. The title refers to the biblical term “sackcloth and ashes” used to denote mourning. In this installation I both mourned nature’s losing battle to overcome humanities’ devastation of the planet, and celebrated its resilience by referencing a phoenix rising from the ashes below. 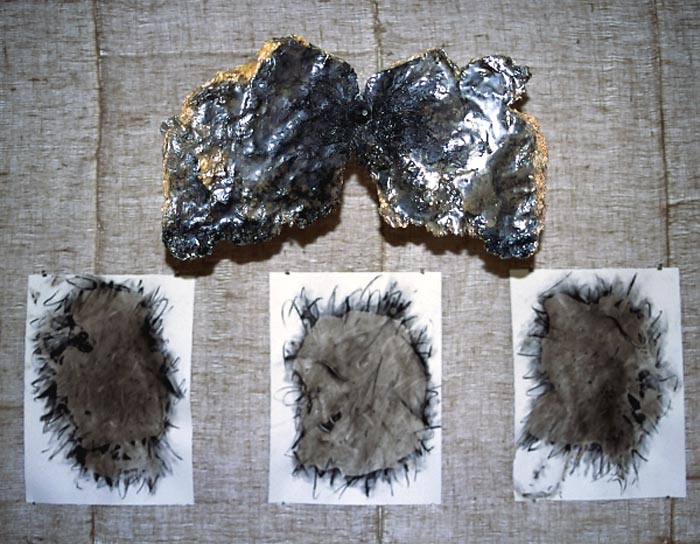 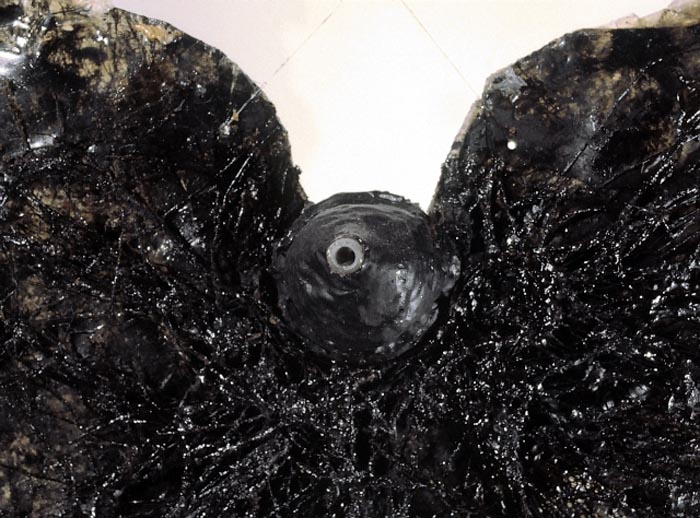 Lost Homeland was an installation inspired by “Baghdad Mon Amour,” written in 2003 by Salah Al-Hamdani, an Iraqi poet, during the United States’ peremptory strike against his country. In it he mourned the loss of friends and loved ones and familiar landmarks in his beloved city of Baghdad. I created a sculpture from scrap metal surrounded by numerous “heads” made from paper mache´. The words of the poem were written in calligraphy on large sheets of paper attached to the wall behind the piece, excerpts of the poem were also calligraphed on the paper mache´ “heads.” 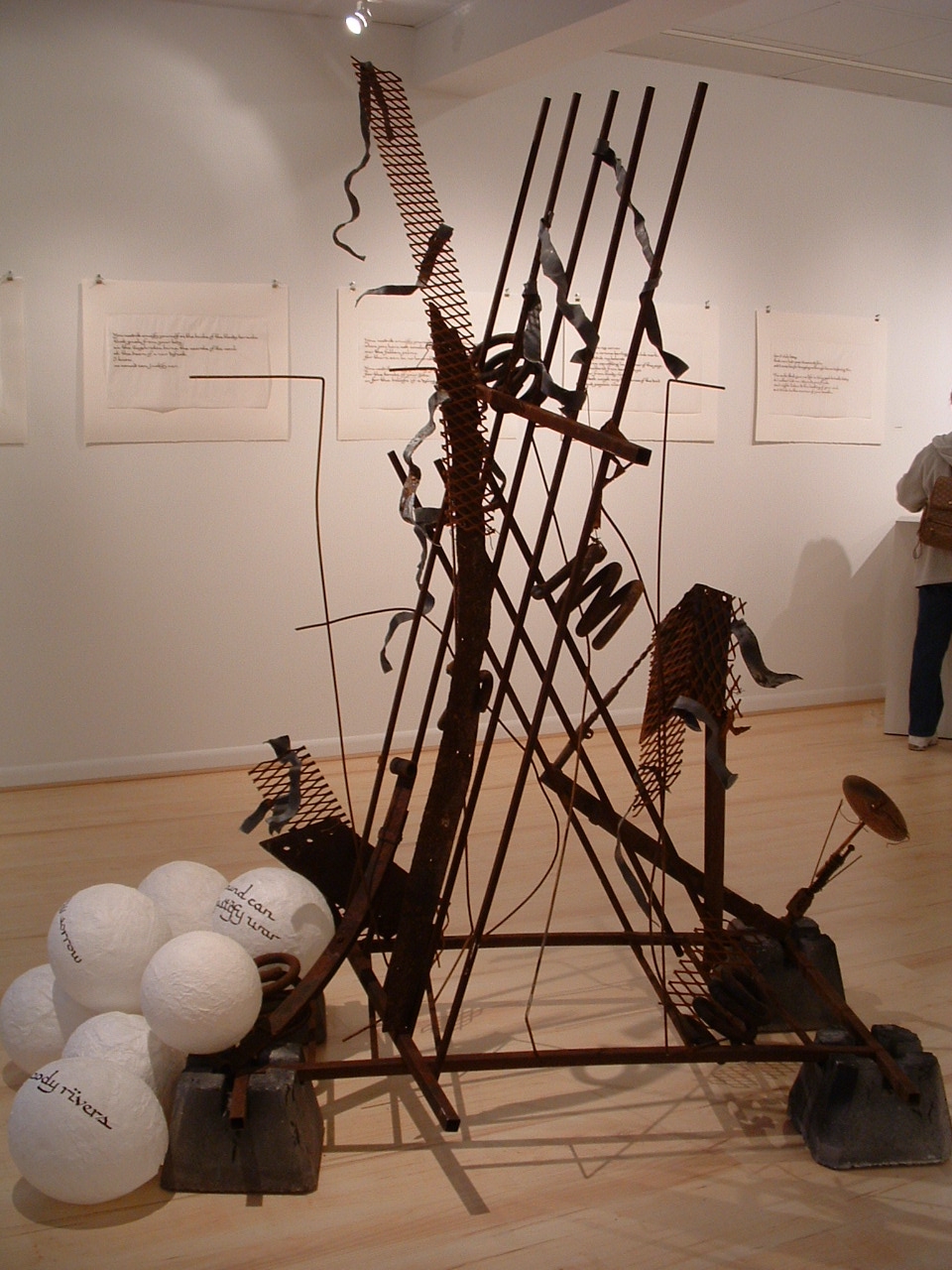 As an Artist-in-Residence, my residencies include participation in a 1989 Earth Day Parade in Santa Fe. Sweeney Elementary School students and I discussed the (then) recent Exxon Valdez oil spill and how court jesters and minstrels in bygone days could state unpleasant truths that others dared not voice for fear of imprisonment, or worse. The students then set to work making signs expressing their concern for the environment and protesting the Exxon Valdez oil spill. Dressed as clowns (modern day minstrels and court jesters) and carrying their signs, they marched in the Earth Day parade. 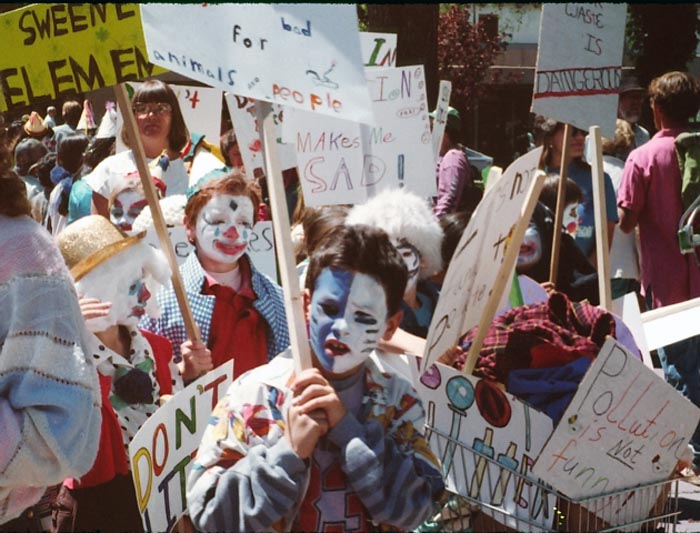 As an Artist-in-Residence with Youth Arts Corps I worked over the course of several summers (with a few former Ringling College students of mine as assistants, including Saori Murphy), with youth at recreation centers throughout Pinellas County, Florida. The participants were asked in advance to collect plastic and cardboard recyclables. After discussing the importance of recycling with the youth, the recyclables were then taped and glued together to form sculptures. While working on their individual sculptures, the youth at each site developed a theme for an installation combining all their sculptures. For a barnyard theme they created a barn, for an outer space theme they built a space ship. There was also a train (pictured below), a Noah’s Ark and a beach scene, among others. Everything was made using recyclables stabilized with plaster bandages then painted.

While waiting for their projects to dry between various stages, students worked on posters about the importance of recycling. These were later displayed with their completed installation. 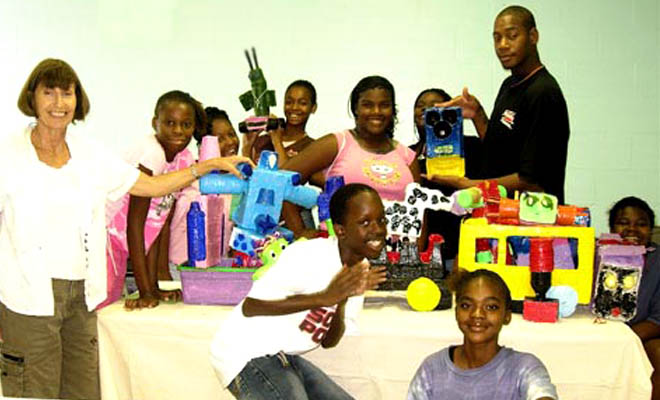