Sanctuary, East and West at Studio@620 in St. Petersburg 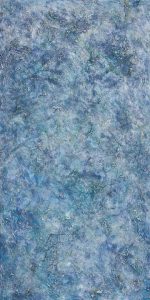 My experiences at an artists’ retreat in India generated work expanding on my Sanctuary installation on view at Gallery@221, HCC, Dale Mabry Campus, in Tampa, in 2014. Sanctuary, East and West opens at Studio@620, in St. Petersburg on Saturday, May 13, 5:00-9:00pm. Artist’s talk at 5:30.

Inspired by an image in a dream of a tree with fish instead of leaves on the ends of its branches, I performed “Sacrifice of the Son” at the San Francisco Museum of Modern Art in 1978. The only prop was a life-size sculpture of a stylized tree similar to the one I had seen in my dream. In this work I explored the prehistoric matriarchal ritual sacrificing the queen’s son/consort to ensure the continuity of nature’s cycle. In Christianity, the religion with which westerners are most familiar, it symbolizes Christ, the sacrificed Son of God, but the fish symbol was prevalent in ancient cultures the world over.

Contemporaneously, sacrifice still occurs. Now, however, our health is jeopardized and Nature sacrificed. Thus “civilization” reaps the short-term benefits and convenience of energy and resources created by the military industrial complex in general, and the petrochemical industry in particular. 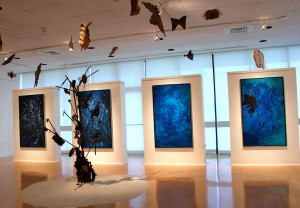 The installation Sanctuary, exhibited in 2014 at Hillsborough Community College, was inspired by my love of Florida’s Juniper Springs and the knowledge that it, like all of Florida’s freshwater springs (there are over 900 of them), are threatened by pollution. Sanctuary also featured a stylized tree; this tree’s branches were weighed down with pieces of rusted metal, industrial detritus that litters the planet.

For me, as for many artists, nature is both sanctuary and inspiration. In the United States, visual artists, writers and composers, from Georgia O’Keeffe to Henry David Thoreau to Aaron Copland, have for generations found inspiration and solace in nature; and individuals from every social strata have sought sanctuary from the daily grind in this country’s beautiful national parks.

In 2016 I traveled to India where I found an equivalent sanctuary to those that I had discovered in North America. This was the Sanskriti Kendra, an artists’ retreat on four lovingly tended acres outside of New Delhi. My original intention, while at at the Sanskriti Kendra, was to focus my work on the Yamuna River. Running from the Himalayas through New Delhi, a city with twenty million inhabitants, it is the most polluted river in India.

What Anna Katherine wrote about the Ganges River is all also true of the sacred Yamuna River.

When I arrived at the Sanskriti Kendra, the trees growing throughout the property and labeled in both Hindi and English with names such as Tree of Sadness, Bodhi Tree, Krishna’s Buttercup and Devil’s Tree drew my attention. In spite of the pall of acrid smog that hung in the air at night, and the polluted water of the area, they seemed to thrive. These trees became the focus of my art. They spoke to me of resilience, surviving in this Indian sanctuary regardless of the polluted air and water.

The ground for a number of the works that I created in India is the golden soil of the Sanskriti Kendra, on which actual leaves from the various trees are painstakingly traced and then painted. Others, used in collages, are depicted in watercolors and mixed media inspired by the riotous colors and patterns on Indian women’s saris and the designs on the tiles at the Taj Mahal. The majority are on handmade paper manufactured in India from recycled cotton rag.

Sanctuary, East and West includes much of the work I created for the exhibition of Sanctuary at HCC in Tampa. Now, however, the works inspired by my trip to India, as well as my ongoing yogic practice of meditation, are incorporated into the original installation. In my version of a contemporary “sanctuary,” there is river sand on the floor (representing the sand of all of the world’s waterways). Viewers leave their footprints in the sand for we are all implicated in the demise of Mother Nature, including problems facing our planet’s aquatic treasures.

Members of the public are invited to share their thoughts and concerns about Earth’s waterways, once pristine sanctuaries, now becoming overgrown with suffocating algae and sullied by pollutants. Perhaps they, too, find sanctuaries in unexpected places where their equivalent of the polluted Yamuna River is transformed through signs, however small, of hope and ingenuity.

This video was compiled after I wrote this blog post using an excerpt from a talk I gave at Sanctuary, East and West at The Studio@620 as well as an excerpt from an interview by Barbara St. Clair of Creative Pinellas. Listen to the entire podcast.

* Anna Katherine “Bathing in the Ganges” from Beyond Anarchy: a Visit to India, self-published.