When I first arrived in the United States I had something of an identity crisis. In my home country, South Africa, I had owned a trendy and successful women’s fashion boutique called Roses. In Johannesburg I was Rose of Roses! At the San Francisco Art Institute, where I had recently arrived to get a BFA in Painting, I was just another first year art student. In an attempt to connect myself to my South African roots, I would carry my boxes of art supplies on my head the way I had seen African women carry water pots and even sewing machines. They, however, did not need to balance these heavy items with their hands as yours truly had to! Even my wedding dress at the time was a caftan made of African print fabric.

Over time, I began to identify, not as a South African (with all the baggage that that entailed), rather as a citizen of the world. After all, before I reached the age of forty, I had lived in South Africa, England, Canada and in various places in the USA. And I had traveled extensively throughout Southern Africa and Europe. Didn’t that qualify me to consider myself a citizen of the world?

In 1990 Nelson Mandela was finally released from prison. I was elated! He had been incarcerated for 27 years, most of that time on Robben Island, along with others who had been convicted during the Rivonia Trial of 1963 and ’64. Among the convicted was Bram Fischer, a lawyer, who had been hired to defend Mandela and the other detainees and who ultimately was himself given a life sentence for contravening the Suppression of Communism Act. I knew Bram as nothing more than my good friend Ilse Fischer’s father. He was the stern dad who sat at the head of the breakfast table one morning and chastised me for dipping my butter knife into the jam!

The first truly democratic general elections were held in South Africa in April of 1994. Not long after that I read Mandela’s autobiography, A Long Walk to Freedom. Soon after reading of Mandela’s and other African activists’ struggles, I started work on the first abstract paintings in the series Bound Crosses and Boundary Crossings. My musings, as I worked on this series about what it means to be a white South African became, in part, the theme of my dissertation for a PhD in Studio Art and Arts Administration. The title is Crossing Boundaries, a Woman’s Art: Artists and Visionaries Who Challenge Dichotomies. My experience of racism and sexism is that they are intimately connected by a patriarchal mindset. In both my dissertation and my art I continue to explore these connections, albeit abstractly. Now, with Me Too followed by the Black Lives Matter Movement, these themes are particularly relevant here in the United States.

After graduating with a PhD, and moving to St Petersburg, Florida, I continued work on Bound Crosses and Boundary Crossings. I have exhibited these works in various art galleries throughout the Eastern USA and from time to time I add new works to the series.

In August of this year Karen Riffe approached me about exhibiting my art. Karen is one of my longtime Morean Arts Center Beginning/Intermediate Painting Course students. She, together with her brother, Ward Smith, had just opened a theater in St Pete, Studio Grand Central. Their first production, Rasheeda Speaking, was to open in a couple of weeks and she wanted art for The Gallery, a small space that’s part of the theater. Her vision is to show, not just any art, but art that relates to the theme of the play being performed at the theater. Rasheeda Speaking addresses racism in a contemporary office setting. After we discussed her options, which were few given the very limited time-frame, Karen invited me to exhibit some works from Bound Crosses and Boundary Crossings.

Here’s my Artist Statement as it appeared in The Gallery at Studio Grand Central:

My involvement with crossing boundaries speaks to my own transitions: the transition of my country of birth, South Africa, from bondage to freedom in 1994, a transition that affected me profoundly; the transition from “Mother” to “Crone,” were I to view my life from the perspective of the mythological Maiden, Mother and Crone; and the transitions, connected with the latter, in my relationship with my son, Jaro Majer, who passed away suddenly in 2016.

My plastic involvement is with the tactile, sensuous aspects of materials that are often non-traditional. The source of my inspiration is a chemical reaction that occurs when compounds are mixed; or the changes that take place over time as an object weathers, exposed to the elements. Found objects acquire new identities and metaphorical meaning through this alchemical process. The work becomes akin to a relic that bears the imprint of time. Each piece is a documentation of my surrender to its daemon or spirit. As I add layer upon layer, building a textural surface, I am simultaneously unearthing an abstraction of my autobiography: the work is an external metaphor for an internal process; it attests to my own emotional, spiritual and intellectual journey.

In incorporating stitching into my work, I am reclaiming women’s crafts art and a tradition in my own family: my grandmother was a dressmaker and some of my earliest memories of my childhood in South Africa are of my mother at her sewing machine.

Much of my work goes through a process of “wounding” and “healing.” The crosses in these mixed media works are invariably “wounded:” a fitting symbol for the wounded state of the apartheid-torn, “Christian” country to which I have never returned. The “wounding” is a violation: I slash the canvas or paper; or burn portions of it with acid or blow torch. I then repair the “wound” with stitching: an amelioration of pain and loss that is part of the human condition.

The closing reception for Rose Marie Prins: Bound Crosses and Boundary Crossings was on the evening of September 18. After the reception I, along with a few of my friends and students —a boundary that blurs over time—got to view one of the last performances of Rasheeda Speaking. Later, Karen asked me if I had enjoyed the performance. I answered to the effect that coming from a racist country like South Africa, it pushed a lot of my buttons. So “enjoyed” wasn’t the term I’d use to describe my reaction. I did, however, find it tense, compelling and very well acted and directed. I look forward to seeing their next production about a lesbian couple. I also look forward to seeing the art that Karen selects to resonate with the rainbow theme! 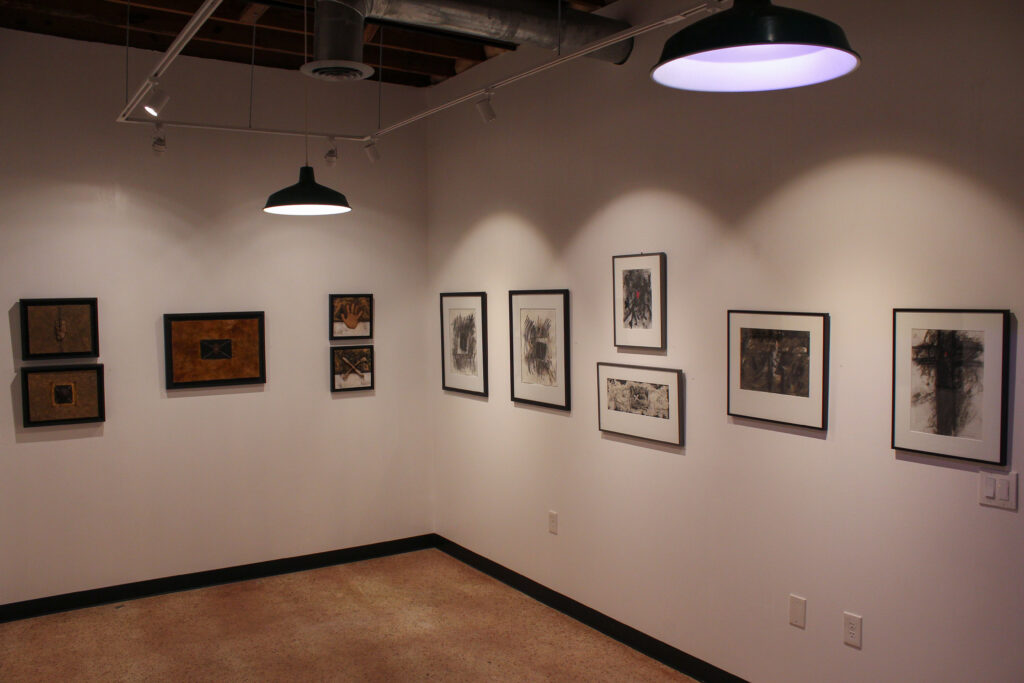 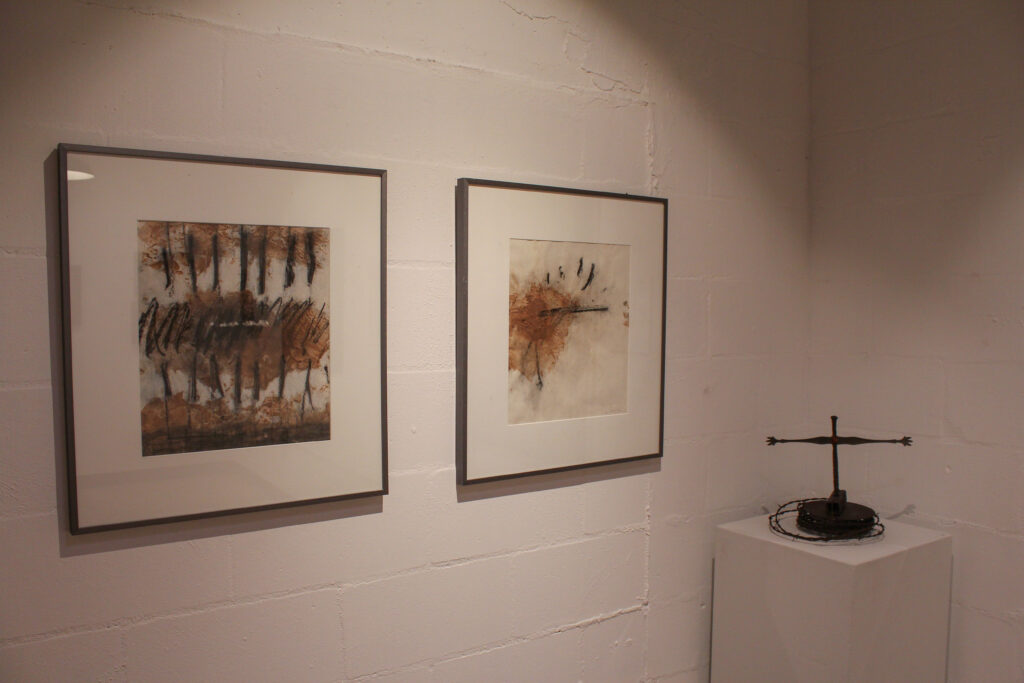 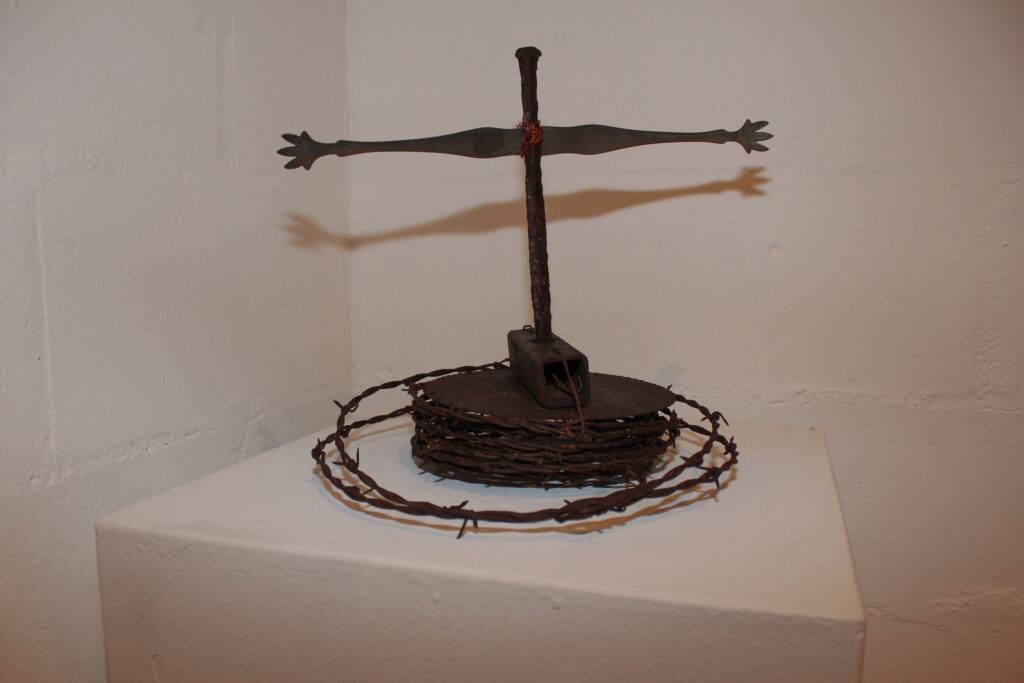 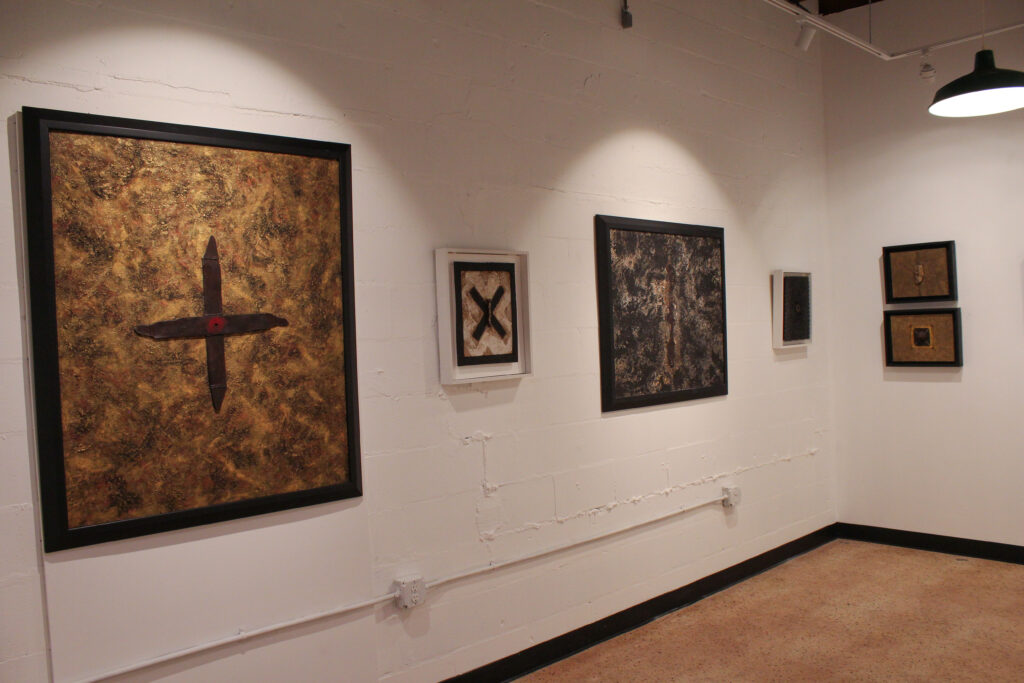 The large black painting, Sackcloth and Ashes in the center received the John Brown Memorial Award for painting in the All Florida juried exhibition a few years ago. Juror, Richard Vine, is the senior editor of Art in America.

The images below were taken at the closing reception at Studio Grand Central on September 18th, 2021. 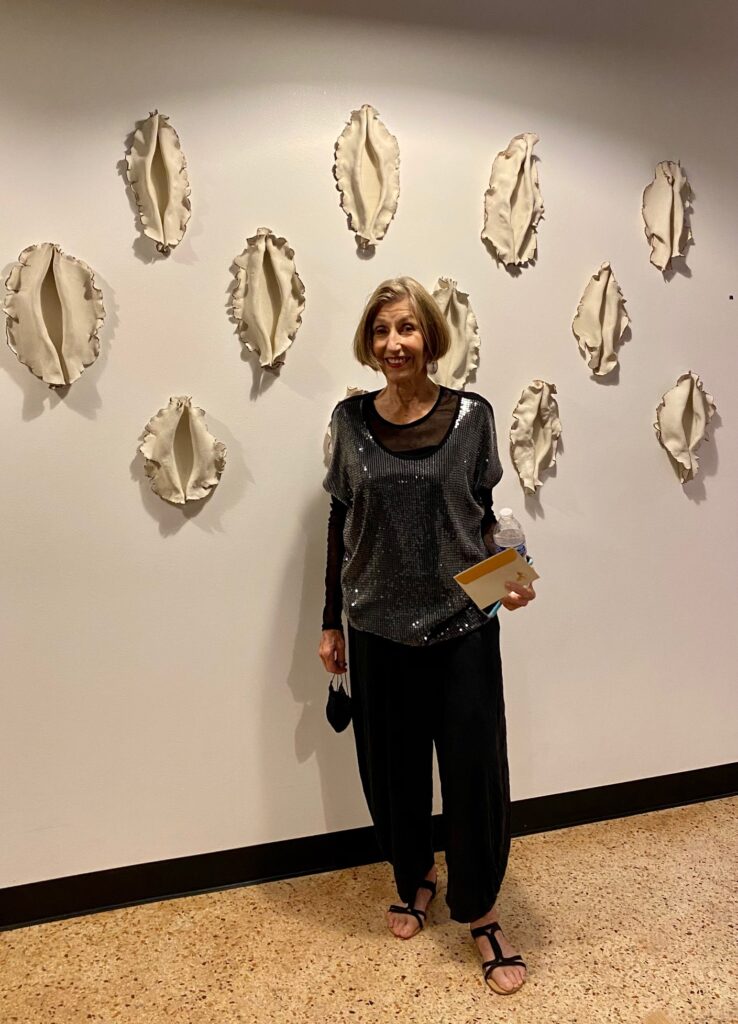 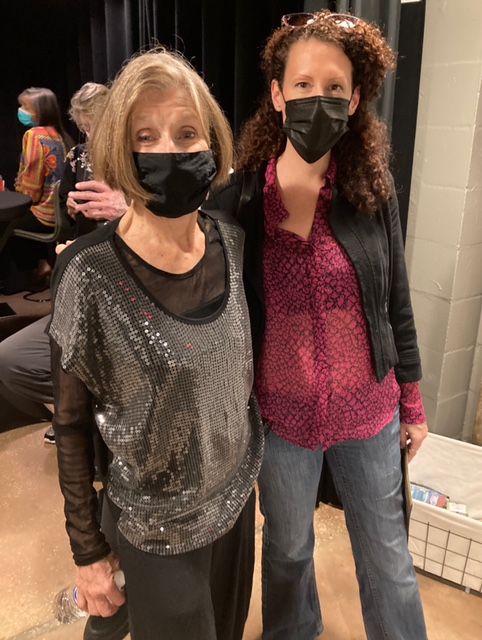 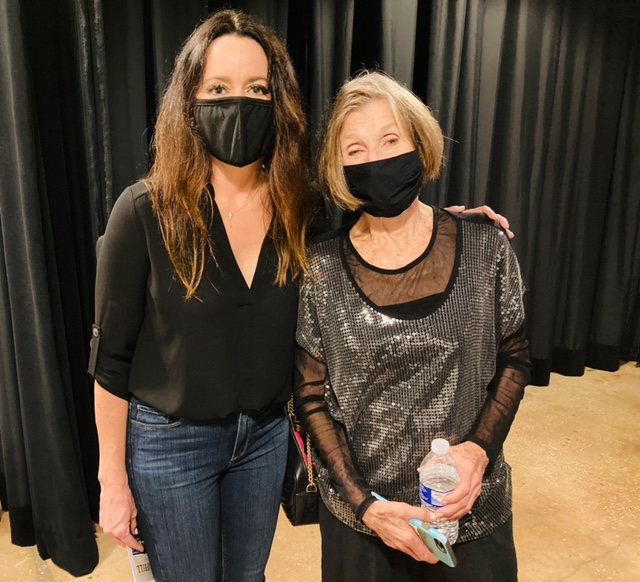 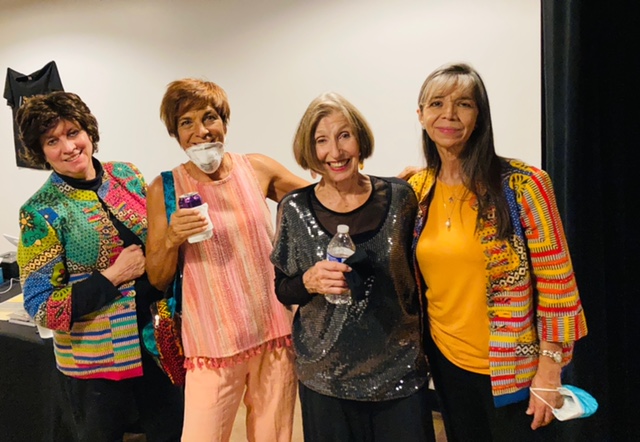 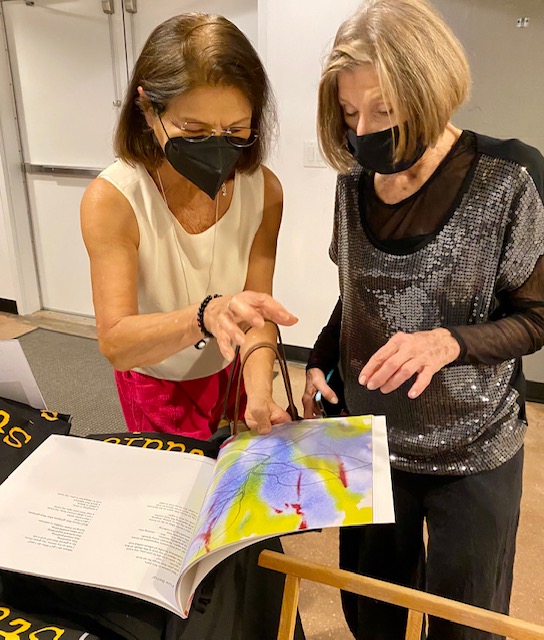 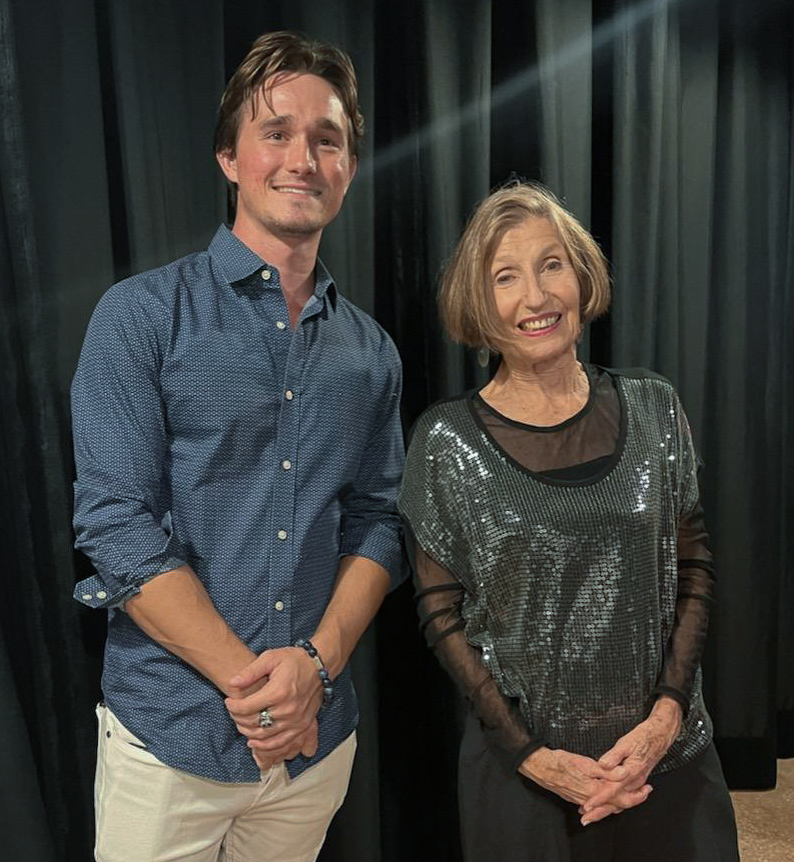 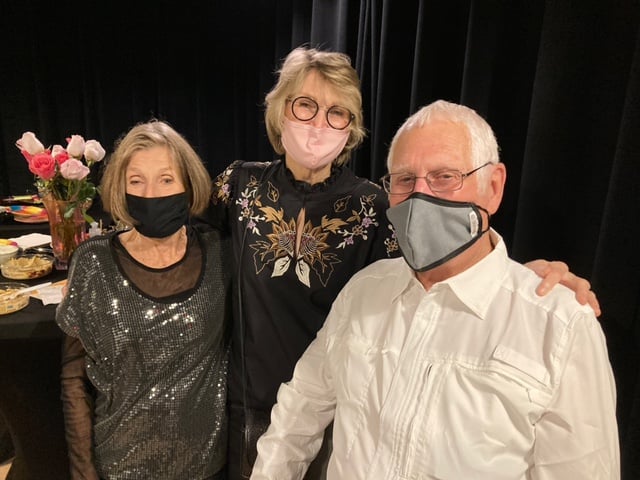 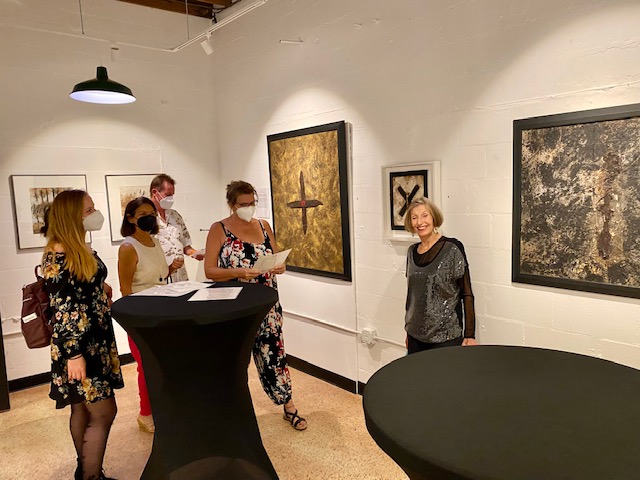