On a Monday afternoon in early March, the couple who purchased my mixed media piece, “Leaving, Terra Firma with Teak Leaf,” held an event in their home in my honor. One member of the couple invited several of her friends to a high tea, while her husband acted as cheerleader and videographer. Among the delicacies served were traditional English cucumber and watercress sandwiches!

I was asked to talk about the piece they had purchased which I had started during a residency at the Virginia Center for the Creative Art’s Moulin à Nef artists retreat in Auvillar, France. I used soil from the Garonne River (which ran through the village and which I could see from my bedroom window), Sumi ink and charcoal on Mulberry paper for the ground. Later, back in the United States, I added the teak leaf that I’d picked during a residency at the Sanskriti Kendra in New Delhi in the winter of 2016/17 and carefully preserved.

I also spoke about the book, A Leaf in the Wind: Poems by Jaro Majer, Artwork by Rose Marie Prins, that I published in the Summer of 2020. Jaro was my talented and very intelligent son who was diagnosed with schizophrenia when he was in his twenties and who passed away suddenly in the fall of 2016. 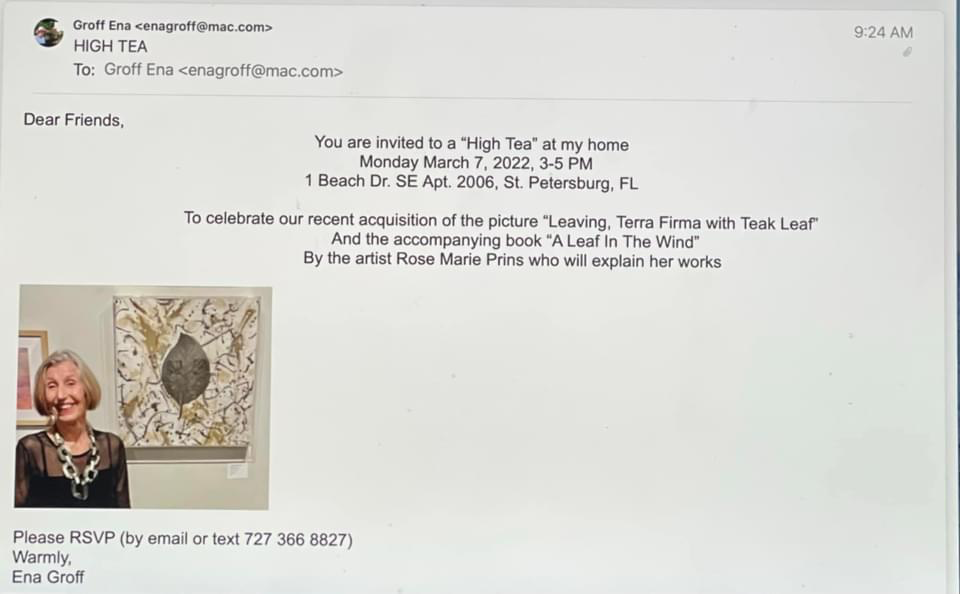 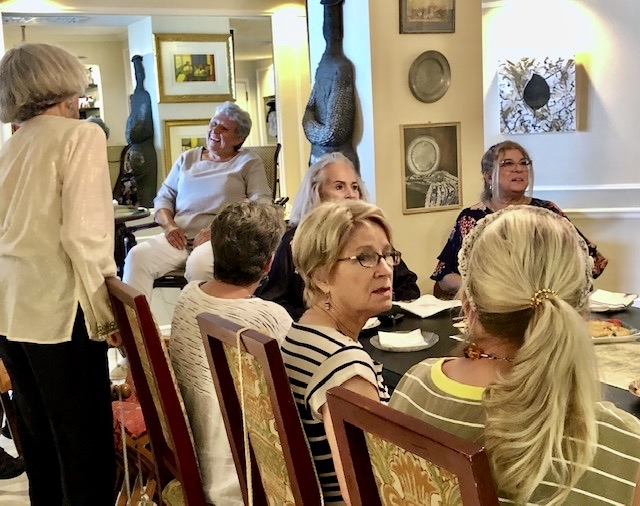 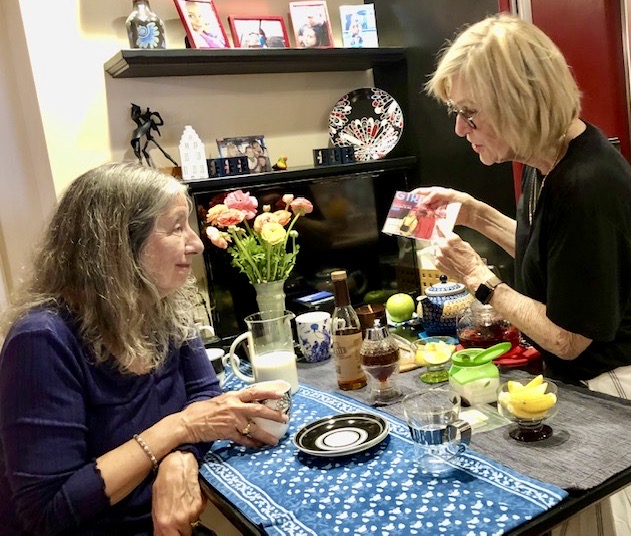 In mid-March I taught my annual Spring Day-Long Mixed Media Workshop. This year the theme was Journeys. I prepared my back deck and studio while the full moon was setting behind the trees. 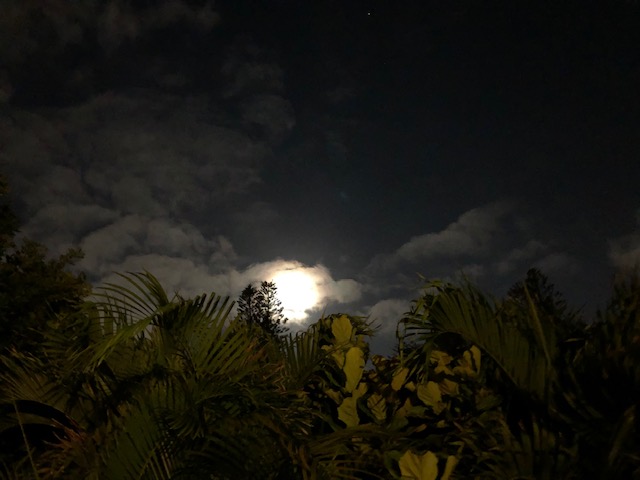 After introductions over tea and coffee on my deck, participants worked in my studio on a warmup exercise relating to travel, featuring music from a variety of countries. The goal was to explore outer worlds as well as inner realms.

In the afternoon participants watched a demo before experimenting with cold wax painting. 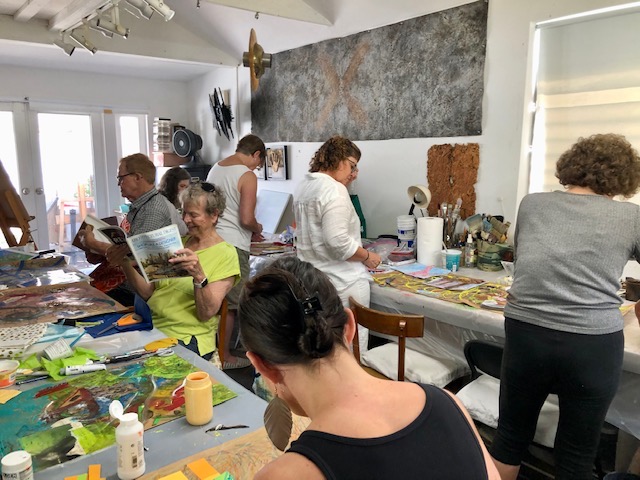 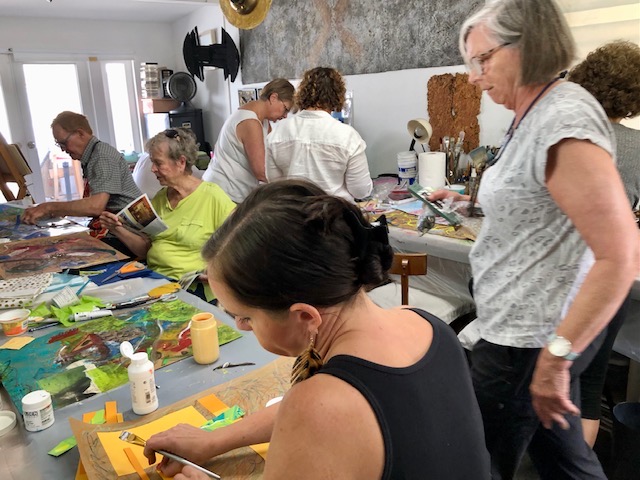 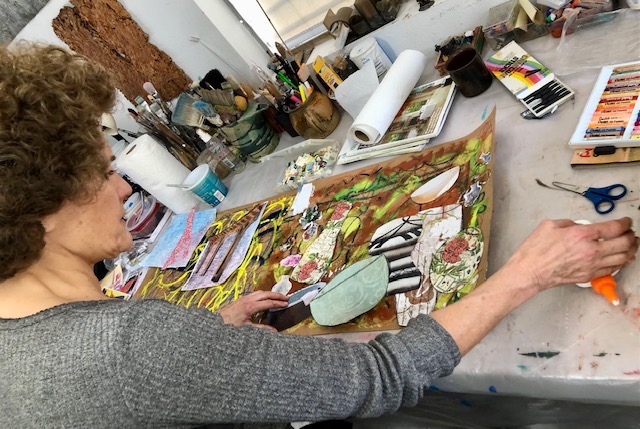 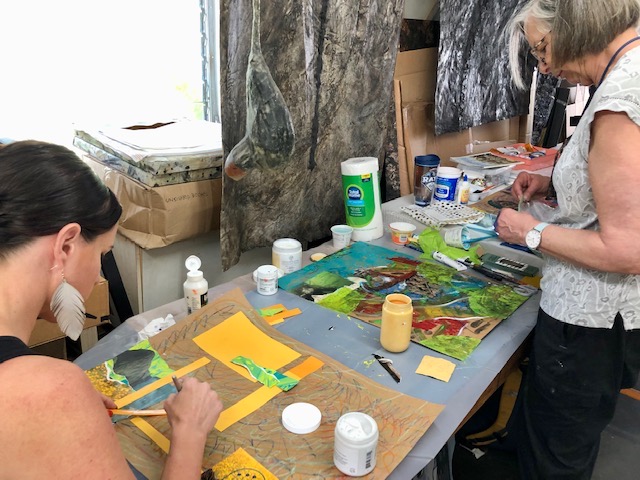 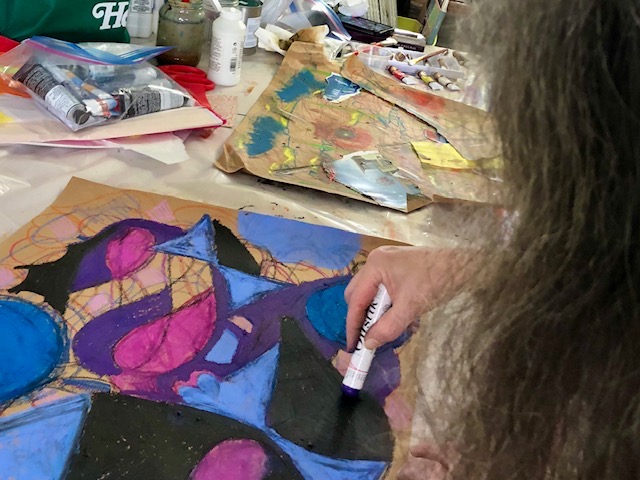 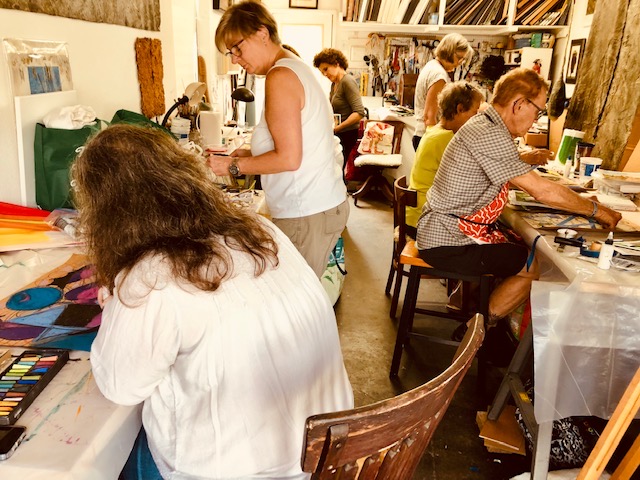 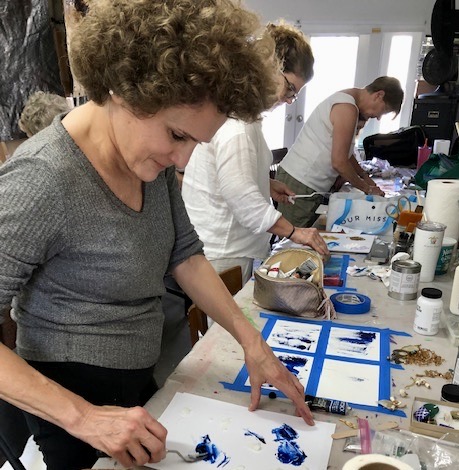 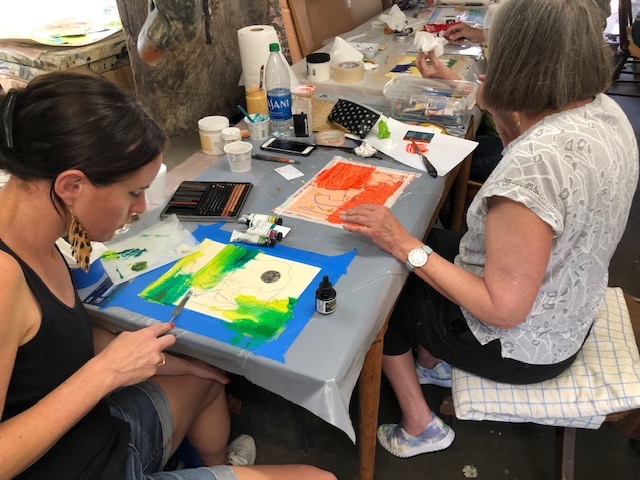 At the end of the day, we held a final critique on my deck. Participants displayed their warm-up collaborations created as they “journeyed” to the sounds of music from the US to the Caribbean, South America, Europe, Africa, India and Thailand. Also their cold wax medium experiments. There were some stunning completed works on display, others, works-in-progress, that promise to be stunning. We were blessed with delightful weather.

A few participants, who’d not seen our book, A Leaf in the Wind: Poems by Jaro Majer, Artwork by Rose Marie Prins, bought copies. It is, in part, the documentation of my personal journey through grief. 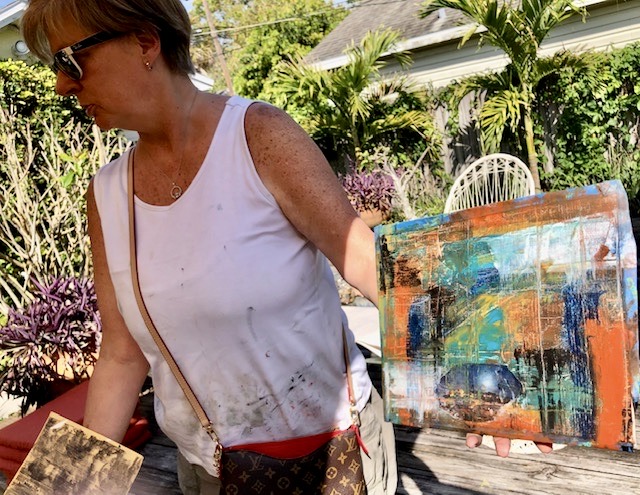 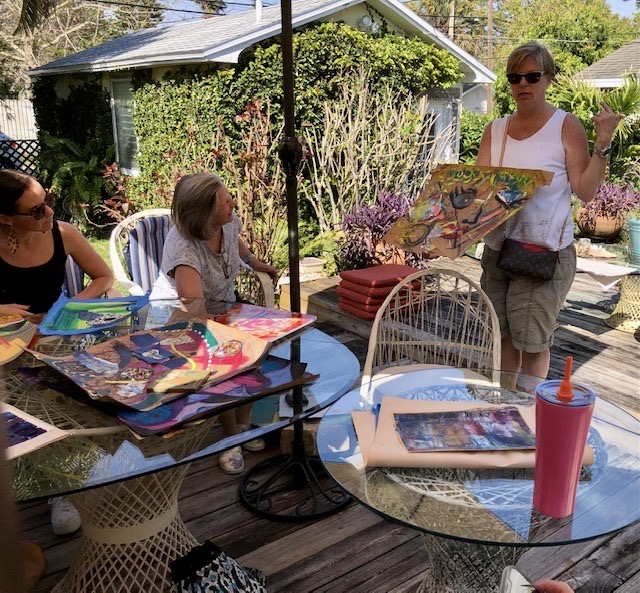 Suzanne with one of her cold wax medium paintings. 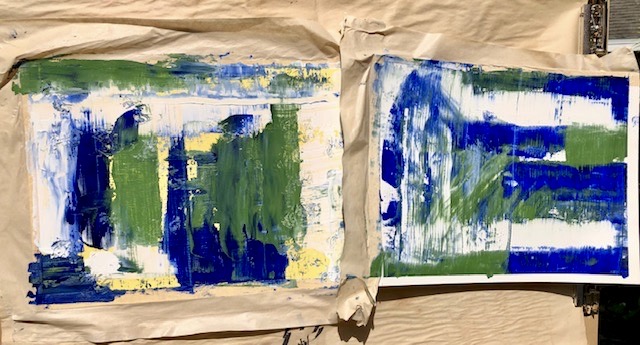 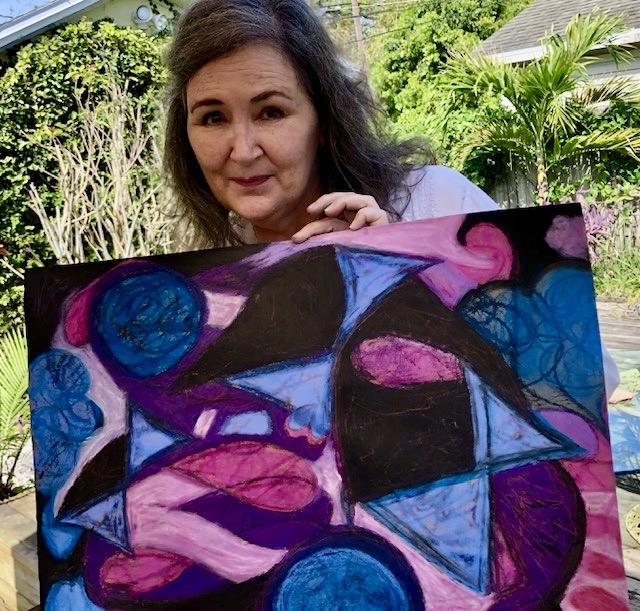 Karen Riffe with her transformed warm-up project. It went through a number of (collaborative) changes before she completed it. 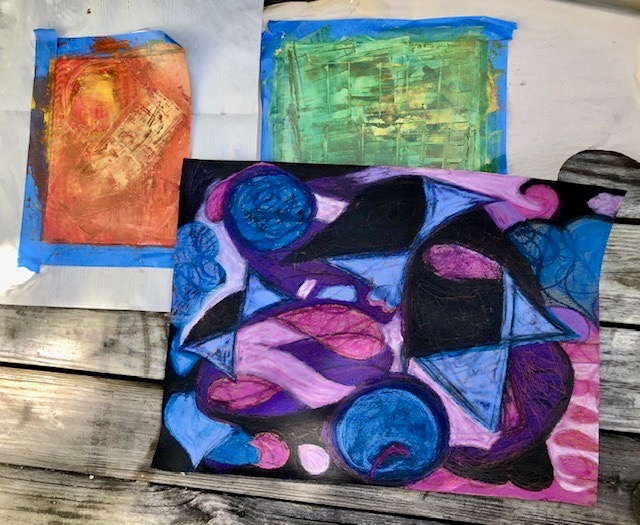 The result of Karen’s creative efforts. Cold wax paintings behind, mixed media in the foreground. 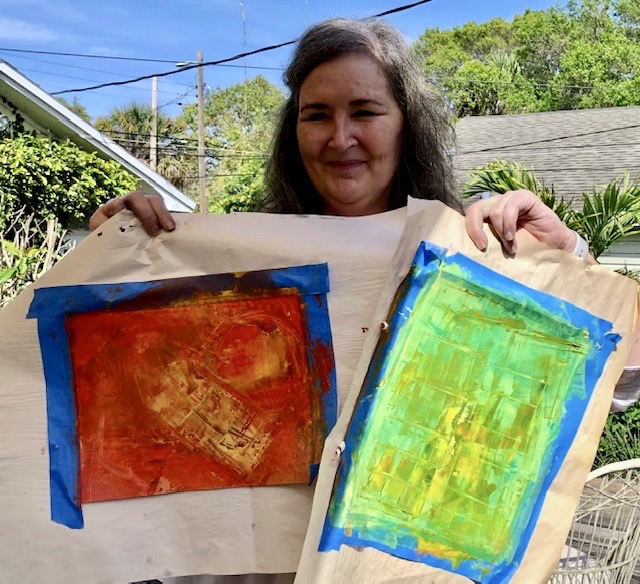 Karen with her cold wax paintings. 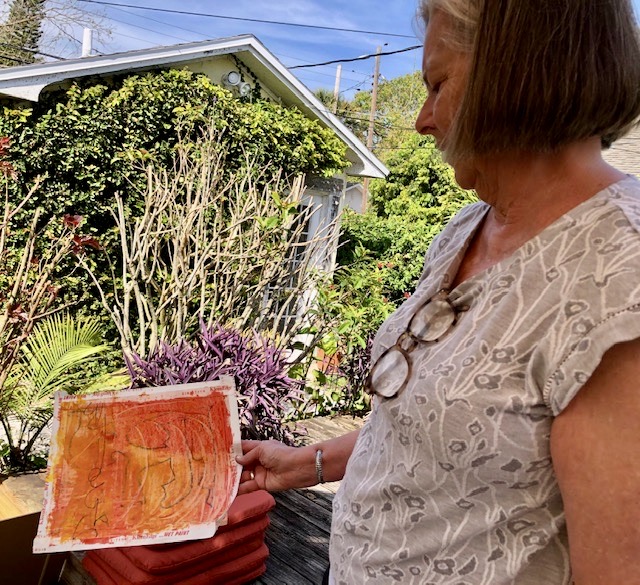 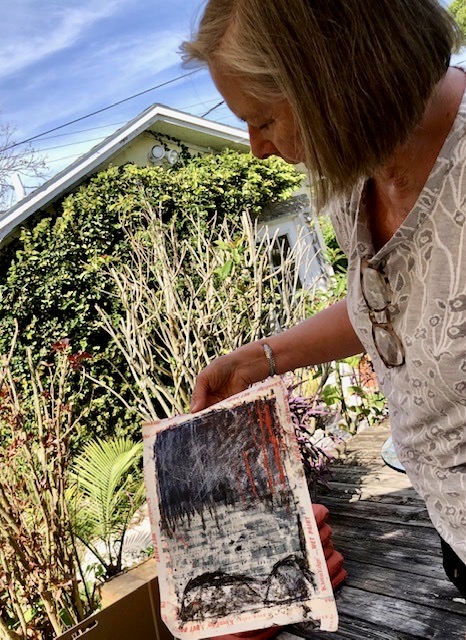 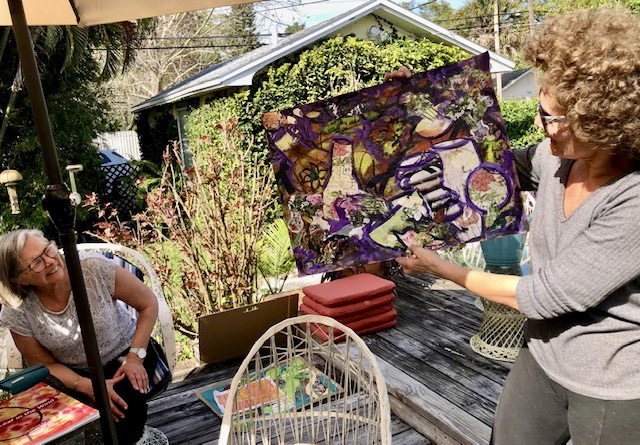 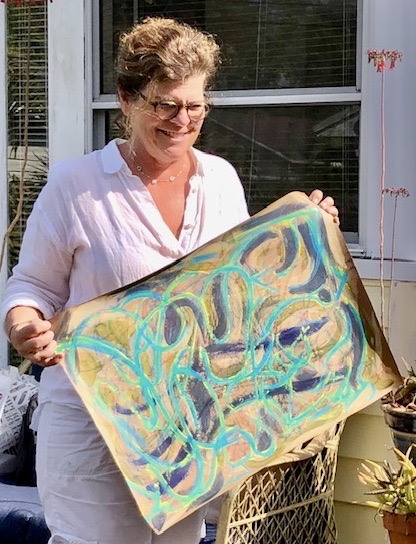 Gina Modica with her morning’s warm-up project in collage and mixed media. 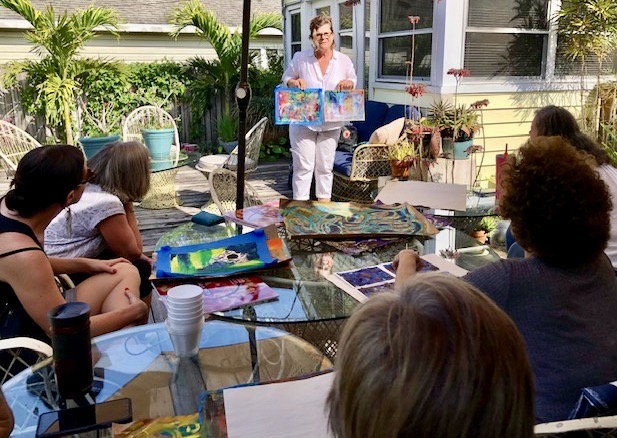 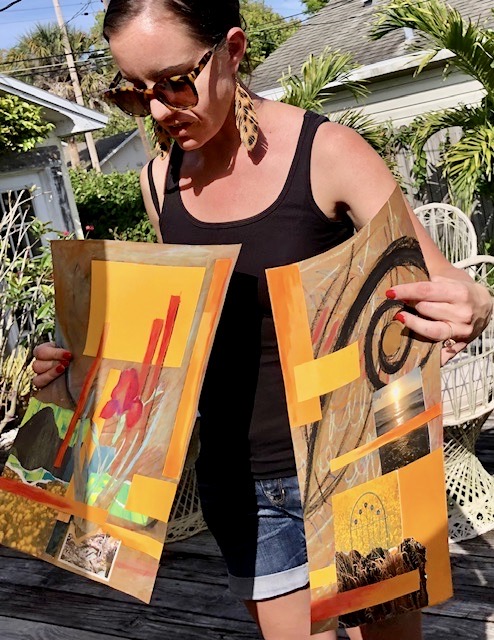 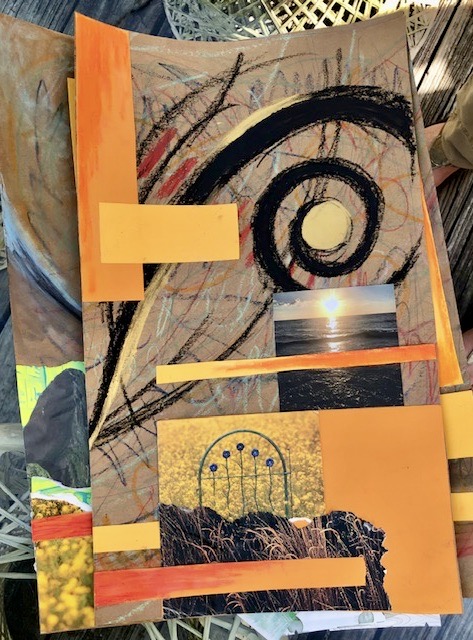 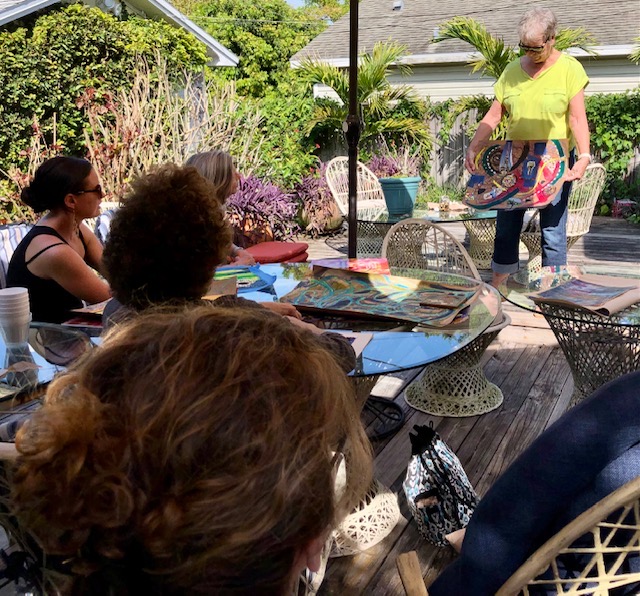 One Sunday afternoon in early April, at the request of Suzanne Benton our President, I gave a presentation to the members of the Florida Chapter of the Women’s Caucus for Art, This was our first in-person meeting since the start of the pandemic. It was held in the Chihuly Collection’s garden in downtown St Petersburg.

My presentation was titled The Healing Power of Art. Below is a partial transcript. I ended with a description of my personal experience with the healing power of art after Jaro died. 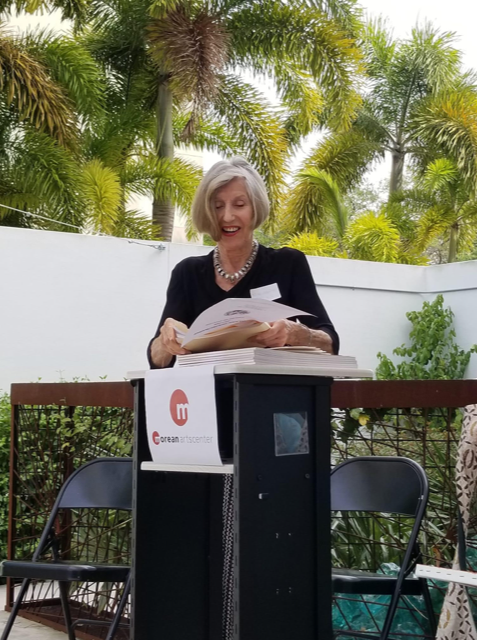 In 2009 Creative Clay established an arts in healthcare program, Creative Care. I was one of the first creatives to be invited to join the team. As part of our training, we visited the University of Florida’s Shands Hospital in Gainesville to observe their well-established arts in medicine program. We also spent a weekend of intensive training at the Franciscan Center in Tampa. Then we, visual artists, writers, musicians and dancers, worked with patients and their families at Ronald McDonald House, All Children’s Hospital, St Anthony’s Hospital and Benedict Haven.

In the hospitals we worked in the oncology, infusion, psychiatric and post-operation wards. We worked bedside with individual patients, also groups of patients and family members and, occasionally, groups of staff and volunteers. The reasons why art in healthcare works are numerous and there’s an excellent video on the Shand’s Arts in Medicine website that enumerates them. To sum them up: in situations where one is confronted by one’s own mortality—creativity is life affirming.

Some of the images patients made with me at All Children’s Hospital and St Anthony’s Hospital are available on greeting at Creative Clay in St Pete. Over and over people told me, “You made my day!” The children in Infusion at All Children’s Hospital would ask the nurses to send me to their booth. When I arrived, their eyes would light up. Sometimes I was called upon to use art-making to distract a suffering child. I was amazed at how quickly tears could change to smiles.

During my time working at St Anthony’s Hospital a few artists-in-healthcare-in-training shadowed me. One of these was Debra Walling who later, after her mother passed away, published a book, Tending to My Wounds: Coping with Grief One Square at a Time; also the companion workbook, Healing Through Art. Debra told me that her book, “came to be because eventually in grief there needs to be… closure… the book is where I found closure on my grief from my mother’s death.”

One memorable interaction I had was with a patient at St Anthony’s Hospital. The patient knew that his illness was terminal and he asked me to work with him to make a card for his wife. I taught him how to draw a simple rose and he did the rest, writing a message in the card to his wife about his deep love for her. Months later, after he had passed away, I received a note from her sent through the hospital staff. In it she told me how much that card meant to her, that it remains on her deck as a reminder of their love.

Eventually, because of funding cuts, etc., I was the only artist left of our original Creative Care team. I worked exclusively at St Anthony’s Hospital until the start of the pandemic.

Earlier this year I received the following communication from my supervisor at the hospital, the nun who is Vice President of Mission Integration:

“I can’t thank you enough for sharing your expertise, experience and compassion with us and our patients. You certainly played an important part in the healing of the whole person for many of our patients that you encountered. It was a shame, for just when the need for your services was was even greater during Covid, we had to close the hospital to all but essential Team Members…Thank you for being such a blessing to St. Anthony’s… You have displayed for us the important value of Art in the Healing process.”

In 2016 my son died suddenly and I came to learn first-hand the value of art in the healing process. After giving grief the time it needed, as Debra Walling put it, I too, published a book.